Designer Oscar de la Renta, well known  and admired for his talent, producing exquisite and very feminine dresses, passed away at the age of 82 on October 20th, leaving the fashion world utterly sad. Just some weeks before his death, he created the wedding gown for Amal Alamuddin, now George Clooney’s wife. His fans’ list is big – along 40 years, he was a favorite of first ladies, actresses and models. He was diagnosed with cancer in 2006 and left behind his wife Annette and son Moises.

Dominican born de la Renta, first started drawing the fashion world’s attention in the 60s, designing clothes for Jackie Kennedy. He left his country at the age of 18, going to Madrid, where he worked for Balenciaga. After that, he moved to Paris and worked for Lanvin. He has also worked for Balmain. Interesting is the fact that he started creating wedding gowns just from 2006 on.

The several times awarded designer showed his collection on New York Fashion Week in September this year. Just one week ago it was announced that designer Peter Copping was appointed creative director of Oscar’s label. The fashion world mourns Oscar de la Renta’s death, but his passion for life and unique style will remain in the hearts of his admirers. 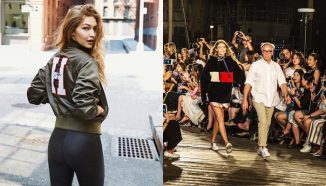